42 Sleek Superhero Ensembles
http://www.trendhunter.com/slideshow/superhero-ensembles
Posted by CuttingEdgeBlog at 3:34 AM No comments:

Buyer insight,
When going into negotiations know your limits, always discuss and confirm exit strategies with vendor partners in case of left over merchandise. There is a peace of mind when you know the outcome of any situation.

How Zara Grew Into the World’s Largest Fashion Retailer

Are you where your customers are? New data from Europe 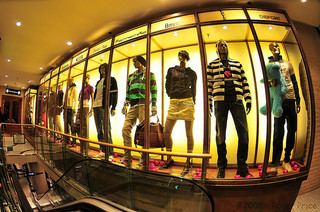 Our annual global survey of consumer habits online was recently completed. This entry is focused on Europe. Future ones will share insights on Asia, Africa and South America - so stay tuned. Here are some stats and points that particularly interested me
Consumers have already gone digital when shopping for products in categories such as consumer electronics and mobile/digital goods. Some 60 percent of consumers report that they research these products online before buying, and nearly half make more than 25 percent of their purchases online. But product categories such as furniture, clothing, and footwear – once classic offline domains – are now also being researched and purchased in the digital space. This trend is expected to continue.
The number of consumers who use their computers to conduct online research within certain purchase categories has already seen a significant rise from 41 percent in 2010 to 50 percent in 2012. In that same time period, the number of consumers using mobile devices for product research has nearly doubled – from 12 to 21 percent. Both means of information retrieval are especially popular among consumers shopping for mobile phones. Nearly every second consumer searches for information online and approximately one-third of them conduct mobile device-based research before purchasing a new mobile phone.
There are, however, still great differences between the European countries. The Netherlands is in front with 55 percent of Dutch consumers conducting computer-based research for a mobile phone and 43 percent using mobile devices to gather pre-purchase information. On the other end, only 33 percent of Polish consumers perform computer-based research for a mobile phone and only 9 percent of French shoppers use their mobile device for that purpose.
A major new disruption for retailers combines traditional and digital research – the in-store use of mobile devices. More than 20 percent of consumers already use mobile phones for product research across all categories, and 40 percent of them do it in store, primarily to consult professional reviews and price comparison sites.
If they hope to capture the resulting growth opportunity, companies in all industries will need to ensure that they offer their goods through the right channels so that consumers can easily and quickly find what they are looking for.
You can get the full report here: "Mobile is growing fast. Are you ready?".
Learn more on our Chief Marketing & Sales Officer Forum site. And follow me on Twitter (@joshleibowitz) so we can carry on the conversation.
[Photo: antwerpenR, Flickr]
Posted by CuttingEdgeBlog at 3:34 AM No comments:

Streetwear Past and Present

Fashion throughout last century has been continually changing, but only for the last sixty years has youth culture and the emergence of highly identifiable streetwear trends had such an influence on popular fashion. Streetwear today has seen a particular brand of NZ design which is specific to New Zealand, one influenced by Kiwiana giftware and homeware into popular streetwear. Where did all of this begin?
The Beginning of Streetwear
The 1950s was a time of change for the entire Western world, particularly with the post-war materialisation of popular culture via the media. The term ‘teenager' was coined during this period, after the influences from film, music, television and magazines were for the first time, shaping a generation. The 1950s was particularly important as for the first time in history, young people had disposable money available to spend on themselves - and they had the freedom to do so.
Two particular styles came to light during this decade: Greasers and Preppies. The Greaser era took the biker look set by Marlon Brando in The Wild One (1953), and reinvented it for daily life with one key stable shining through: the denim jean. This was supplemented later in the 50s by the Preppy look, focused on fastidious tidiness and immaculate grooming, as enforced upon youth culture by collegian institutes.
Freedom Influences Fashion
The 1960s were highly influenced by pop music and the freedom of speech. Baby boomers were speaking out about politics in a way their parents were never able to through music, a liberation that flowed through to the popular choice in unconventional or risqué fashion choices. The Mod style saw mini-dresses and tapered pants popularised as a way to show skin like never before. Later in the 1960s, the Hippy style saw a rebellion against the Preppy style of the 1950s which was forced upon many, which resulted in influence from alternative eastern cultures - beads, kaftans and so on.
Tunics and other Indian-inspired looks followed through the early 1970s, and the emergence of polyester opened a new door for colour and pattern which spurred on the next streetwear trend for the decade. Clothing inspired by modern dance and athleticism saw flared pants, jumpsuits and wrap-around items come into popular wear because of their comfort and versatility.
Icons Influence Streetwear
Music, once again, was the key influencer in fashion when the 1980s came around. The nightclubbing era saw comfort and innovation in stretch fabric popularised, and key pop stars like Madonna proved influential over fashion, with looks revolved around layering and baggy tops with tight-fitting bottoms.
The late 1980s and early 1990s saw the first emergence of Hip Hip culture onto fashion, with African American nationalism being brought into mainstream view. Baggy sportswear as streetwear was made popular by both hip hops stars and sporting heroes such as Michael Jordan, and brands like Nike and Adidas became popular stables in streetwear for the youth of this era.
Fashion Starts to Relax
The mid to late 1990s brought surf culture to light. While most surf brands (Rip Curl, Billabong, Quicksilver) were developed in the late 1960s or early 1970s, they were purely ‘cottage suppliers' for surfers for several years. Professional surfing became a popular interest amongst the 1990s youth with stars like Kelly Slater becoming poster-bound for bedroom walls. Logos which had initially been on surfboards were being transferred to T-shirts, and the relaxed nature of boardshorts meant they became the streetwear of choice for young and old alike.
Looking to the Past
The early 2000s saw hip-hop culture re-emerge in fashion, along with other hybrids of streetwear trends from the past. For the first time in history, a specific New Zealand-driven trend emerged, one encompasses local influences rather than international fads.
NZ Design Influences in Streetwear
The style of streetwear today amongst New Zealanders is focused on national pride, with influences from Maori culture and Kiwiana showing through in popular fashion. This trend in streetwear was actually started by New Zealand designers as a wearable representation of nostalgic New Zealand giftware and homeware, taken from childhood memories of ‘The Kiwi Household'.
Kitschy imagery of Kiwi bird symbols, Maori Koru designs, beach reeds, airlines and even trusted food products, condiments and kitchen utensils have become the new muse for a new kind of streetwear. Retro images are ever-present on the New Zealand youth today. While printed t-shirts and other streetwear commonly feature these images of Kiwiana, accessories such as hats and jewellery too, are encompassing these icons in their design. Subsequently, these giftware and homeware products themselves have re-emerged as desirable commodities of New Zealand design.
Streetwear Today
So how can we define streetwear today? Individuality is key, and you can find influences from every one of the past trends from the last sixty years present in casualwear everywhere you look. New Zealand design is more present than ever before, and for the first time a part of the New Zealand streetwear landscape has not been taken directly from an international source - it has been born from pure New Zealand cultural influences.
Looking to buy some Kiwiana-inspired New Zealand streetwear and homeware at an online
design store? Check out the NZS.com directory.

The NZS.com Streetwear Today article contains a history of streetwear fashion and streetwear today in New Zealand and internationally.
Posted by CuttingEdgeBlog at 8:42 PM No comments:

What to Wear When You're Broke / Don't stop buying, swap with pals


Fashion's a breeze when you've got money to blow. But getting that fresh-from-the-runway look gets tricky when you're short on cash. Here's how to look good for less in a material world:


Sounds basic, but to really save a bundle on clothes you have to be willing to pass up enticing promotions (15% off; free shipping; gift with purchase) and hold out for the hard-core sales (40% off is good; 50% and up will land you a buy for almost what it cost the retailer).


Counterintuitive? Well, think about dieting and how you pass on sweets and carbs until you binge. Scary, but it can happen with pent-up shopping desires, too (and credit card debt racked up in a binge will end up costing you a fortune). Satiate the fashion lover in you with a very small treat: you set the amount and frequency ($10 a month for new earrings, etc.) Pay with cash.


Sure, stuff is cheaper when bought at the end of the season or even out of season. And that's fine if you're just looking for any old thing to wear. But if you love fashion (and you do, or you wouldn't be here), you should shop as close to the season as possible. Otherwise you'll just waste your money on trends that will be out of style by the time the next year rolls around.


Friends that wear your size (and share your taste) are a gold mine. You can even go large scale and organize a swap meet where everyone can switch shoes, clothes, etc.


Get rid of your inner snob


Scour second-hand and discount stores. Buy basics from the warehouse where you buy your paper towels in bulk. If vintage is your thing, haunt flea markets and garage sales.


Learn to whip together a new outfit on the sewing machine or simply turn old jeans into a new skirt. Recycling is an easy update: a ruffle on last year's skirt, a bow at the ankle of three-year-old strappy sandals.
Posted by CuttingEdgeBlog at 4:05 AM No comments: